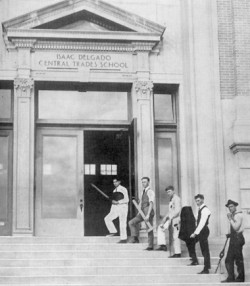 Isaac Delgado, the original benefactor of the College for whom the school was named, was a nineteenth century immigrant from Jamaica who became a wealthy New Orleans businessman and sugar planter. His philanthropies included the arts, medicine, and education. In a 1909 codicil to his will, he bequeathed the residue of his estate to the City of New Orleans to establish a manual trade school for young boys. With funds from this bequest, land was purchased for the current fifty-seven-acre City Park Campus adjacent to New Orleans Municipal City Park. The original building on City Park Avenue was constructed and furnished with the bulk of the bequest. In September of 1921, Delgado Central Trades School opened its doors with a program of vocational trades for 1300 boys and young men. After thriving in the 1920s, Delgado was left without adequate funding during the years of the Great Depression. Revived during World War II by the need for technically skilled workers in aircraft construction and maintenance, and in the metal and woodworking trades, Delgado had a brief period of glory in the 1940s, only to once again fall into desperate financial straits during the 1950s.

In the mid-fifties, under the leadership of its Director, Marvin E. Thames, Sr., Delgado began to search for a new mission and adequate funding. In 1956-1957, Tulane University made a survey of Delgado’s role and scope in a changing economy. Its prime recommendations were that Delgado be expanded to a technical institute at the junior college level and that its main function be to provide post-high-school educational programs for technicians—and that the school be properly funded. The recommendation was adopted by the Delgado Board of Managers and the New Orleans City Council. As a result, the name of the institution was changed to Delgado Trades and Technical Institute, and a technical two-year college program was implemented. In 1960, the first graduates of Delgado Institute received their college degrees.

By action of the Louisiana State Legislature and the New Orleans City Council, in 1966 Delgado Institute became Isaac Delgado College and then Delgado Vocational-Technical Junior College and was recognized and approved as a model multi-campus, comprehensive community/junior college for Louisiana. Dr. Thames became its first President. Four years later, in 1970, Act 446 of the State Legislature (based on a 1969 New Orleans City Council Resolution) transferred Delgado College from control by the City of New Orleans to the Louisiana State Board of Education. Delgado was accredited by the Commission on Colleges of the Southern Association of Colleges and Schools in 1971; the accreditation was reaffirmed in 1975, 1986, and 1996. The College name was changed to Delgado Community College by Legislative act in 1980. In 1982 the central administration of the College was moved into a new building at 501 City Park Avenue, adjacent to the City Park Campus. Since the early 1970s, with state funding for students and facilities, not only has the original City Park Campus developed dramatically, but other new campuses and learning sites have brought Delgado Community College to all areas of metropolitan New Orleans.

Today, Delgado is renowned as Louisiana’s oldest and largest community college, serving men and women of all ages who reflect the diversity of the New Orleans metropolitan area. Delgado is a comprehensive, multi-campus community college and a major institution of higher education in the State of Louisiana. Its seven locations form a center for professional and advanced technology career education, academic pre-baccalaureate education, and traditional occupational training.